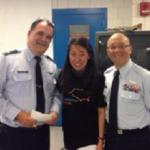 Shirley Liu is 32 years old and originally from Beijing, China. She earned her undergraduate degree in Beijing University with a degree in Agriculture. After she had worked for several companies and experienced different positions, she found out that she had a passion for education.

Liu didn’t like the Chinese education style and wanted to explore more advanced education. Then, she gave up her family, her boyfriend, her high-waged job and decided to move to Malden in America.

Liu first went to EF English School, then transferred to the CSI Language school. In the meantime, she also signed up for some classes at Bunker Hill such as psychology. She has been an assistant teacher for a Chinese class in BHCC; been a democracy coach for middle and high school students and multi-generation citizens. After she got her start in the American education system, she felt American students were very independent and realistic.

Liu is here not only here for study but also for enlarge her views. She is a persevering and outgoing woman. She loves the lake in Malden and could jog beside the lake nonstop able for seven miles. She goes to church to do volunteer work and make new friends. She became a member of Malden Access Television–she thought MATV was an amazing place. She really gets wrapped in American way of life. All of these aspects made her want to stay.

Liu sometimes found it difficult too. She gets homesick at times, missing her family and friends. When she was in China, she didn’t need to do chores. Her parents always took care of her. By now, she learned how to cook and manage her house and do everything by herself. Moreover, Shirley wants to go to MIT to earn a Master’s degree. That’s the biggest challenge for her right now. Even though it’s seems impossible, she always advocates the “play hard and study hard” mantra. She believes nothing is impossible if you try your best. That motivates her to work hard for two years in the U.S.

One year after Liu came to the States, she found out a school named Wholeren Education which helped high school students and college students apply to colleges or transfer. Then, she got involved in the school and was interested in the education system.