On Friday January 16, 2015 approximately 250 Massachusetts seniors from across the Commonwealth went to the State House to deliver to Governor Charlie Baker almost 5,000 signature cards.

The signed cards were collected as part of a health care campaign initiated by Mass Senior Action Council (MSAC) demanding that Massachusetts  “bridge the gap” to affordable health care for seniors living below 300 percent of the Federal Poverty Line (FPL) ($35,000) just as they have done for residents under the age of 65. 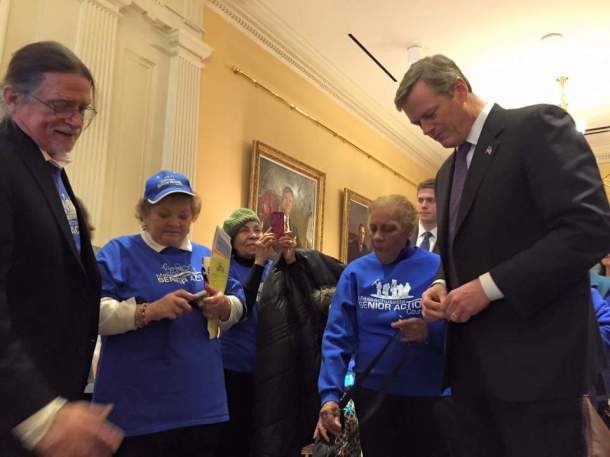 After handing over the nearly 5000 signed cards to Governor Baker the members of Mass Senior Action Council then split up into groups and went to meet with their respective State Representatives and State Senators asking for support on two bills that have been submitted by lead sponsors Representative Denise Garlick and Senator Daniel Wolf. The two bills in The House are HD667 and HD670; in The Senate are SD41 and SD42.

Eleven states, including New York, Connecticut, Rhode Island, Mississippi, Alabama and Arizona have already expanded access to federal programs that help seniors with Medicare costs. Massachusetts has not expanded the access yet, and Mass Senior Action Council members along with thousands of Massachusetts residents are asking “Why Not Mass?” –Marcia Manong and Karen Lynch

Check out more senior power in the video below.

Can the Oak Grove Community Building be saved?

Michael Young stands at the podium in the moments before the bidding begins at the Antique Co-op and Auction House on Eastern Avenue on May 23. As he speaks into the microphone the crowd before him goes silent, “At this very moment the old Ruderman’s is getting torn down,” says Young. “Head on down there this afternoon for a commemorative brick – it’s the end of an era.” After years of vacancy the Ruderman’s building at 42 Ferry St. has indeed been torn down.  The last business to lease the space left in 2011.  For years the building has stood with locked doors and newspaper lined windows, its fate uncertain. A CVS will be constructed where the old Ruderman’s once stood.  CVS currently operates in three distinct locations in Malden: Pleasant Street, Eastern Avenue and Broadway. Neither an exact date for start of construction nor a projected open date for the location have been publicly announced.  There has been neither confirmation nor denial of speculation that this CVS may serve as a replacement for the […]