April’s featured artist over at Release the Sounds is international phenom, Shelita Burke. 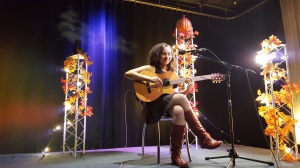 Over the past two years the Seattle-raised singer/songwriter has become a true musical citizen of the world, bringing her fresh indie folk-jazz and what she dubs “emotional art music” on self-generated world tours that hit France to Japan.

In between overseas stints, she’s also done Seattle to NYC tours. She recently visited our studios at MATV during a short stint in Boston. Her debut EP Transfixed was released in November 2015 and was the No. 14 best selling album on Amazon. This kind of success was completely organic, built one fan at a time, one show at a time.

Release the Sounds is so glad Shelita was able to stop by the studio to play for us.

Providence-based artist Anthony Savino has been playing the guitar for about 14 years, and in that time he has developed a swift, craftsman-like fingerpicking style.  He has devoted much of the past decade to making and releasing original work, though his showcase with RTS features almost exclusively as-yet unreleased material, including a song which he wrote as part of the score for Spanish short film based on Jack London’s The Call of the Wild. His approach ranges from lively, gentle and bright as in Red Bird, to pastoral folk pacings that make me somehow homesick as in What You Read. New releases are in the works and soon to be added to his already extensive collection of albums and EP’s, available for listen, streaming and download HERE. Visit the Youtube channel for Release the Sounds HERE for more behind-the-scenes clips. Release the Sounds, airing on MATV (Comcast 3, Verizon 28) every Wednesday at 10 p.m. and Saturdays at 8 p.m., spotlights regional musicians every month.

March’s featured artist over at Release the Sounds is Salem Wolves. This three-piece from the North Shore delivers fuzzy, loud, punchy pop in rhythms ranging from finger-snappers to sultry throbs.  They’ve been in a steady flourish of activity since their formation in the winter of 2014, releasing singles on their label, MegaHex Records, and playing constantly in and around Boston. Release the Sounds is so glad they were able to stop by the studio to play for us. Stop on by the Release the Sounds’ YouTube Channel and check out Salem Wolves’ excellent set, then stop by theirs! For more Salem Wolves in the very near future, listen to Pipeline! on Tuesday, March 15 on WMBR (88.1 FM Boston-Cambridge) from 8-10 p.m.  The show is archived so if you miss it you can search em and hear their stuff even after the fact.  The internet is so great. Speaking of the internet, clickity click below for more of their stuff: http://salemwolves.com http://salemwolves.bandcamp.com http://megahex.bandcamp.com –-Liz Taegel, Producer of Release the Sounds