The March terrorist attack in Westminster in London raises the question:  Is there a connection between domestic violence and lone wolf terrorism attacks?

The wife of Khalid Masood, the perpetrator in the Westminster attack, was reported to have fled his violent attacks. Or consider the recent shooting of Steve Scalise, the majority whip of the House of Representatives, by a man who had been  involved in several acts of domestic violence.

Attacks on female partners are often viewed as an issue of “domestic violence.”  In June, Malden was shocked by the case of  Malden resident, Ryan Power, who is accused of strangling his girlfriend, Leah Penny, a mother of seven, in her home with a dog leash. Power had been previously arrested for pushing Penny, the mother of his two children, to the ground.  Likewise James T. Hodgkinson, the accused Steve Scalise shooter, had been arrested for  attacks against women, including his girlfriend and his daughter.

Domestic violence is not only a serious problem but may be a predictor of future violence.  Ryan Power, for example, had been not only violent towards Penny before but also neighbors and Penny’s mother.  There seems to be a thread that indicates  domestic violence towards partners, usually women,  precedes larger acts of violence.

Through my work as a volunteer in assisting domestic violence victims at New Horizons, a shelter and outreach center for victims of domestic violence, in Wisconsin,  I have learned that the domestic violence issue is complex. And disheartening as it is; many of those women I tried to help most likely went right back to the same violent relationships. A whopping 85% on average do return to those same relationships. The ones that do permanently leave take an average of seven to eight times make it final.That’s why it was cause for celebration when we did help a woman move from the shelter to her own home.

There are several reasons why women don’t leave these relationships;  the most common is financial as found by the National Coalition Against Domestic Violence.  One woman at New Horizons told me, “The cars are in his name, how could I bring the children to school?” This woman had been dragged by her hair according to the police report, which I received verbally on the phone before I contacted her. The Steve Scalise shooter had also been accused of dragging  his daughter by her hair down a sidewalk. As a volunteer, I would call to offer a ride to the shelter or other services. These woman know that if they leave they most likely will have to leave with nothing and start all over again.

Another woman I picked up from the ER said she wouldn’t have anywhere to go because “he owns everything, I wouldn’t have a place to live or anything.” This woman’s partner had on more than one occasion called to have her detained for trespassing.

This latest tragedy in Malden also had a precedent.  Penny apparently stayed with her abuser, even after being pushed to the ground.  According to the Boston Herald, she asked police for a restraining order but never followed up on filing court papers. The same reasons that may have made Penny stay are echoed as the same reasons I heard in the late 1990s  at  New Horizons. According to Penny’s mother quoted in an article by CBS Boston, “She didn’t have a job, she was living in his mother’s home.”

This is why groups like the Zonta Club of Malden are important. The Zonta Club of Malden is “committed to improving the legal, political, economic, health, educational and professional status of women” according to the city of Malden’s website. On Dec. 6, Zonta  held a vigil to raise awareness of domestic violence.  There were eleven figures representing ten females and one male killed in the state of Massachusetts by a partner. Each figure was an outline of a woman’s or man’s body painted entirely in red. One was from Malden. 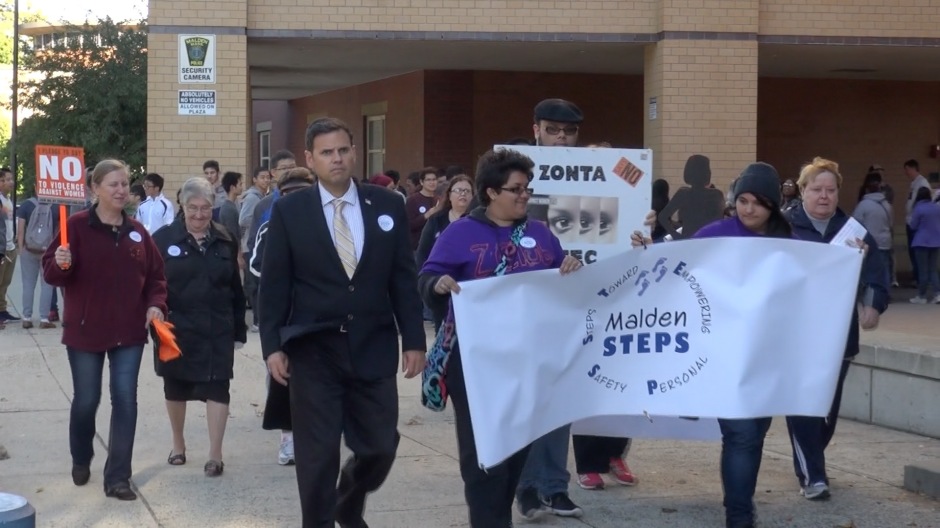 Led by the Zonta Club of Malden, community members take part in the second annual “STEPS Awareness Walk to End Domestic Violence” in 2015, an event that has continued annually.

Currently, the Zonta Club of Malden is sponsoring posters which you can see at the YMCA, in the women’s locker room, with phone numbers for any member who feels threatened in a relationship to call. In the poster a variety of organizations are listed for you to contact.

The Zonta Club has a long history across the United States and around the world of raising the awareness of violence against women. The  Zonta Club is committed to improving the economic status of women which is the reason, I believe, many woman stay in violent relationships.

The Zonta Club seems to be having an impact in Malden. In May the Malden Democratic City Council (MDCC) subcommittee drafted a list of questions that were planned to be submitted to the Malden City Council incumbents and challengers in the current race. One question was “What specifically would you do to reduce the amount of domestic violence in Malden?” Stephen Lewis, a participant of the MDCC, felt it was necessary to include that question in the list. When  asked why, he replied by email that he “stood in vigil with them [the Zonta Club of Malden] at the Malden MBTA station back when it was really cold.” In  the same email , Lewis said raising awareness to this issue was important and that “the most potentially dangerous calls for police are to domestic violence events.”

South Carolina’s silent victims of domestic violence during 2013 are represented in the halls of Marine Corps Air Station Beaufort. South Carolina ranks number one in women killed by their male partners.

In an interview with the New York Times, Paul Gill, a senior lecturer at University College London who studies lone wolf terrorists, said it was more of a lack of inhibition, rather than escalation that increased the incidence of domestic violence. It was not, he said, that partners became more violent, but that each act seemed less inappropriate. “Having a history of violence might help neutralize the natural barriers to committing violence,” he told the Times.

Either way it’s a disturbing trend. Keeping women safe may well keep everyone safe. Maybe the act of deescalating domestic violence deescalates violence in a society in general. And because domestic violence tends to be women improvements should be based on empowering women like the Zonta Club tries to do.

Read an article and view a video in Neighborhood View from 2015 about the annual Zonta STEPS Awareness to End Domestic Violence: https://neighborhoodview.org/2015/10/20/second-annual-steps-awareness-walk-to-end-domestic-violence/

(This featured headline image is a composite from the anti-domestic violence poster collection of Stephen Lewis, resident of Malden.)