MATV, Malden’s Media Center, is pleased to present a video from a special author visit last year to the Malden Public Schools. A preview of the video can be found at the end of this article, with a link to the full program on MATV’s website. 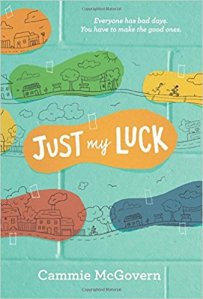 On June 1, 2017,  Malden Reads welcomed author Cammie McGovern to a series of events in Malden. McGovern is the author of Just My Luck, a companion book for the middle grades, selected to accompany the themes of last season’s Malden Reads book selection, A Man Called Ove, by Fredrik Backman.  Just My Luck tells the story of a fourth grade boy who learns to cope with difficult family situations, such as his brother’s autism and his father’s head injury, through his kindhearted spirit and generosity..

During the reception, McGovern was presented a citation on behalf of Mayor Christenson and the City of Malden. The author then answered questions from participants, which included students from Malden High School’s Writers Den, younger students, and adult community members. All were actively engaged in the program and in listening to McGovern’s inspirational talk.

Thanks to the generosity of the Treetops Suite in Malden, as a donation to Malden Reads,McGovern stayed overnight in Malden the evening of June 1.

On June 2, McGovern participated in two different events with students in the Malden Public Schools. The first was a visit with students from the Beebe and Ferryway Schools in the Malden High School library. Students from grades 4 and 5, who had read Just My Luck, wrote an essay that was selected as an exemplar, and then 25 students from each school who wrote essays were selected at random to meet McGovern in person. The students were quite excited to walk with their teachers up to the high school for this special opportunity.

As a writer and a mother of a child with autism, McGovern was able to share her feelings and expertise with the various groups. She described her feelings of rejection when first trying to get published, and she delivered a message of perseverance.

McGovern presented signed copies of her new book Chester and Gus as gifts for the children of Malden. The copies are being housed at the Malden High School library and can be requested by teachers through inter-building mail.

Later that afternoon, Malden Reads welcomed the author to an intergenerational tea party at the Linden School library with their students in grades 4 and 5. One of this year’s Malden Reads themes was intergenerational experiences and so, after Ms. McGovern spent time speaking with students and answering their questions, special elders from Mystic Valley Elder Services as well as from Malden Reads, sat with children over refreshments and discussed the book together. Volunteers at the Linden School library also participated in the event.

McGovern described the students as “wonderfully well-prepared” – all the students came equipped with thoughtful questions. One young girl stated that she came to the reception at the Writers Den even though she was selected to participate the following day– she was that excited to meet the author!

Cammie McGovern has been widely honored for her work advocating on behalf of individuals with disabilities. She is one of the founders of Whole Children/Milestones, a center serving over 600 young adults with disabilities. She lives in Amherst, MA, with her husband and three sons. McGovern is now considered an honorary member of Malden Reads, since she offered her help to find a companion book author in the future.

The students were so excited to meet the author that they asked for a sequel. Malden Reads will collaborate with the literacy coaches and educators in the Malden Public Schools to share the students’ fan fiction with McGovern.

Malden Reads was so pleased to generate so much excitement and inspire creativity through the author’s visit and is looking forward to continuing this through upcoming events and programs. Stay tuned for a new year of all-ages programming for Malden Reads 2018!

Below is a short promo for the full length video. The full video can be viewed at http://vp.telvue.com/preview?id=T01001&video=318460.

Malden Eats, in collaboration with Malden Reads, is excited to announce the return of the Malden Eats Community Dinner series. We invite you to share a convivial meal, at the same time exploring themes related this year’s Malden Reads selection, “Mr. Penumbra’s 24-hour Bookstore” by Robin Sloan. You do not need to have read the book to attend. On Tuesday, March 3 at 7 p.m., join fellow Maldonians for a fun and relaxing meal at Ferry Street Food & Drink located 118 Ferry St. in Malden.   Enjoy the fine food and drink from this “gastro pub,” which refers to a bar and restaurant that specializes in high-end beer and food. The atmosphere is warm and boasts a local tavern-like vibe. Shannon and Jason Ladd opened this neighborhood hot spot last May. The duo met in culinary school at Johnson & Wales in Rhode Island. Chef Jason is originally from Texas and the menu has elements from his home state, including BBQ pork meatball appetizer served over cheddar grits.   Shannon, originally from upstate New York, says the menu for the Tuesday, March 3 dinner will be a garden […]

by Sandra Li On Monday, December 9th the Malden Reads organization held their first launch meeting at the Malden Public Library for the Malden Mass. Memories Road Show event that will be held on May 2nd. At the meeting, various other organizations across Malden were present to discuss more details in regards to the road show and volunteering. The Mass. Memories Road Show is a community history program that was first launched in 2004 and is coordinated by the University of Massachusetts Boston (UMass Boston). Since then, the event has digitized more than 11,000 photographs from across the state. The roadshow will be a capstone event for the 10th year anniversary of Malden Reads. Carolyn Goldstein, who is a representative from UMass Boston, explained that this event will be a “chance to bring people from all corners of the city together,” as it places an importance on archiving the stories and memories of residents. Goldstein presented a slideshow to all the organizations including Chinese Culture Connection, Malden Historical Society, and Massachusetts Senior Action Council, where she […]

Malden Reads: One City, One Book

What if all of Malden read the same book? Malden Reads is a community reading program that seeks to answer that question. Organized by community groups, city leaders, and residents, in collaboration with the Malden Public Library and Malden Access TV, the program invites the community to read the same book and participate in a series of events related to the book’s themes. The goal is to encourage reading, promote the library and other city resources, and build community. The opening celebration is Tuesday, Feb. 20 from 6:30-8:30 p.m. at the Converse Memorial Building. The book? “The Immortal Life of Henrietta Lacks,” a science journalist who brought to light an important person and issue through her curiosity and reporting. The Malden Reads launch kicks off Malden Access Television’s (MATV) citizen journalism project.