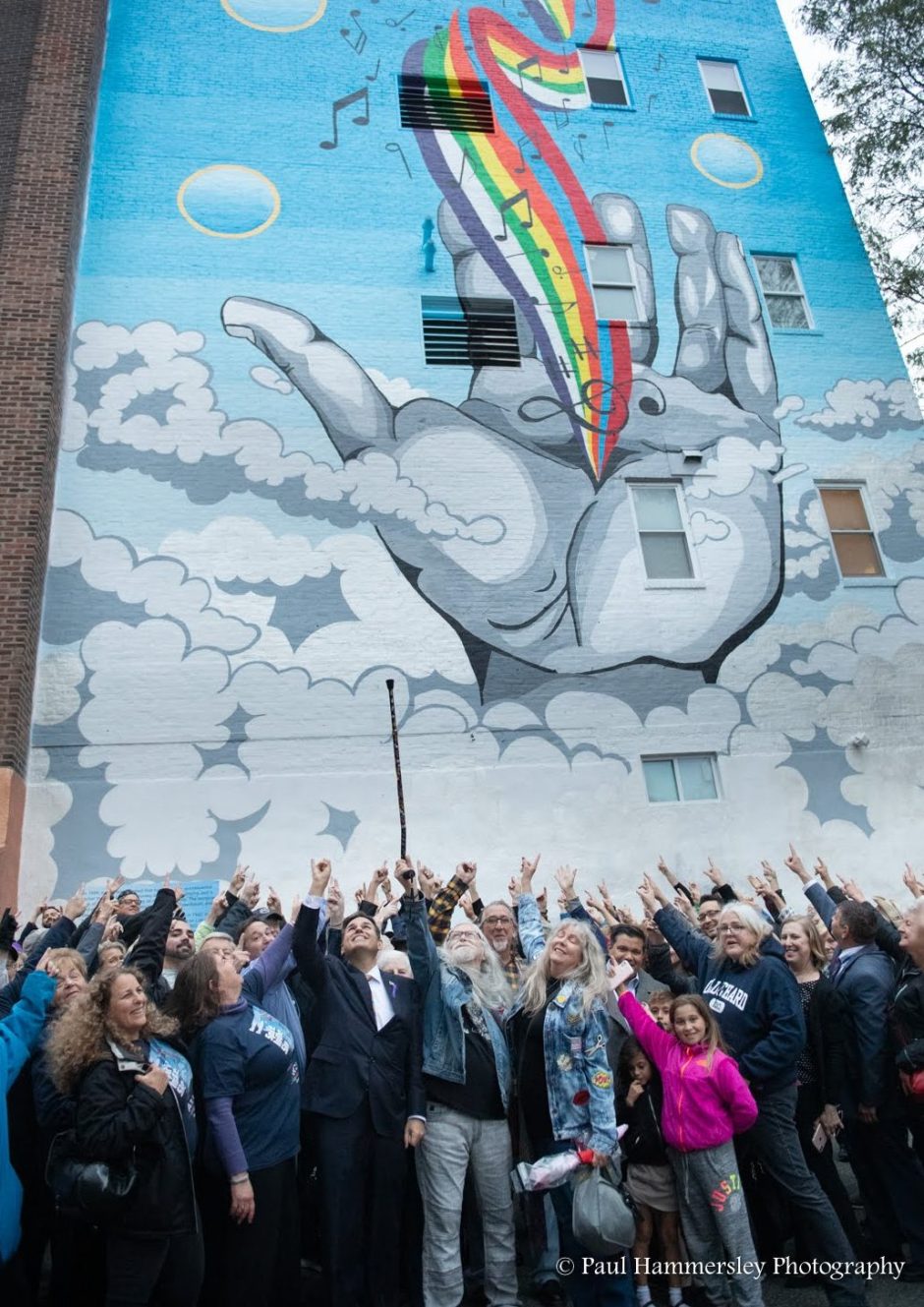 The crowd gathers for a group shot to show their spirit at the dedication of Malden’s “Spirit in the Sky” mural.  (Below) Singer Norman Greenbaum and artist Jess Melanson. Photo by Paul Hammersley. 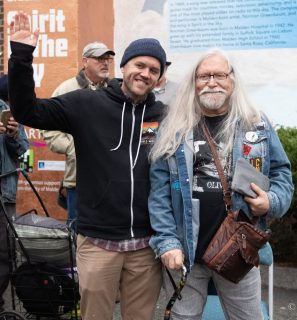 On Oct. 16, the downtown Malden came alive with the sounds of rock ‘n’ roll when classic rocker and former Malden resident Norman Greenbaum returned home to participate in a ribbon-cutting ceremony for the mural inspired by his famous “Spirit in the Sky” hit.

Also on hand was Texas-born artist Jesse Melanson who had painted the four-story mural at 110 Pleasant Street, facing the Exchange Street side, to honor Greenbaum and his enduring song.

A small but excited crowd gathered before the ceremony. When learning that “Spirit in the Sky” would be played,  a participant said, “I hope they blast it!” Another participant commented, “This is so nice” when asked about the mural.

When Greenbaum walked in from across the street, he got stuck in the crowd because so many wanted to talk to him, shake his hand and get a picture with him. When the crowed finally let Greenbaum get to the front, a representative of Malden Arts ARTLine, which sponsored painting of the mural, gave a quick speech and then the distinct chords of  “Spirit in the Sky” were, indeed,  blasted out of loudspeakers.

The crowd joined in the singing with Greenbaum, who even played air guitar on his cane.  After the song ended, Greenbaum, Melanson, Malden Mayor Gary Christenson and others cut  a big red ribbon while the crowd cheered and  took more pictures. 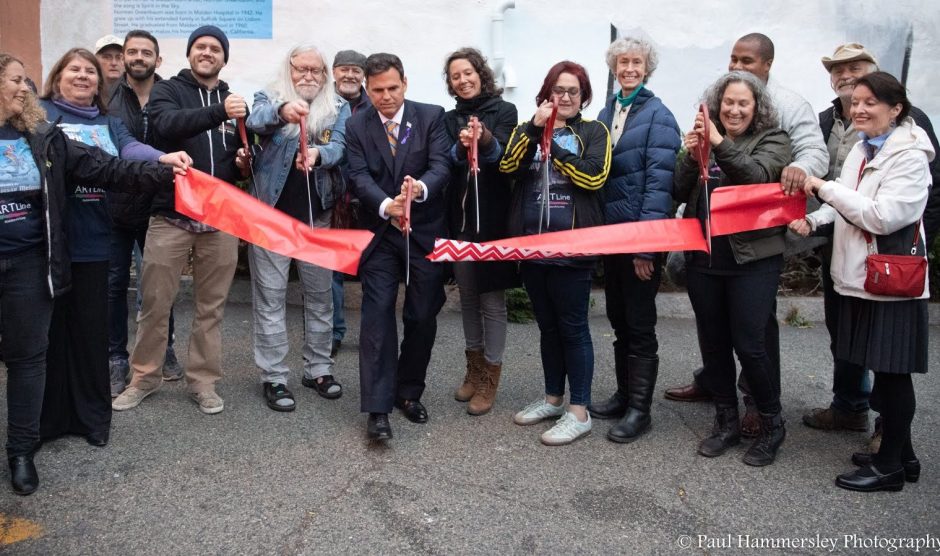 The ribbon-cutting ceremony with Greenbaum, Melanson, Malden officials and representatives of the Malden ARTline. Photos by Paul Hammersley.

A large group photo followed, which took time given the size of those who wanted to have their moment with a bit of rock ‘n’ roll history. Participants were then  invited to go to the Malden senior center for refreshments; CDs and T-shirts and more chances to talk to Greenbaum  and get his autograph.

Greenbaum was happy with the mural when asked his thoughts.  “I wasn’t sure how they would go about doing this; there have been many interpretations of the song over the years, but I like this one. It is very open and loving,” he said.

“Spirit in the Sky” was released 50 years ago in 1969, and has become a quintessential guitar track for movies, TV, and advertising; it still receives radio play today.

At the senior center, an emotional Greenbaum recalled his years with his band. “Getting someone to manage us, getting us a record contract – when all that happened for me,  I thought it was the greatest thing.” He paused and added, “This might have topped it.”

The mural is one of a series of projects by Malden Arts ARTLine, which is promoting public art with  professional murals, sculptures and community hubs.’

All photos (below) by Paul Hammersley. Video (below) by MATV, Malden’s Media Center. 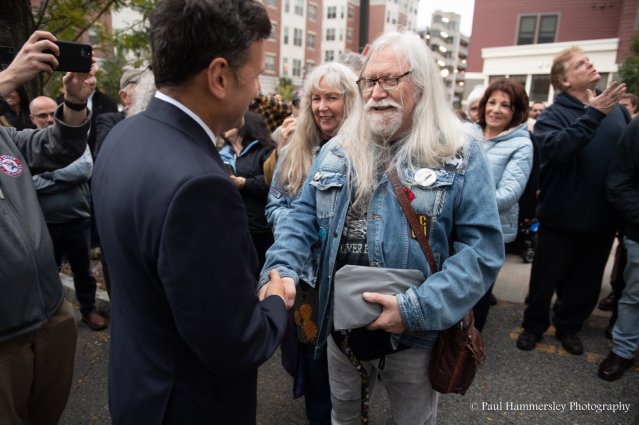 Shaking hand with the mayor 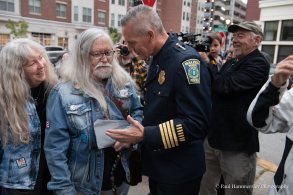 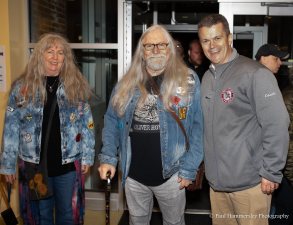 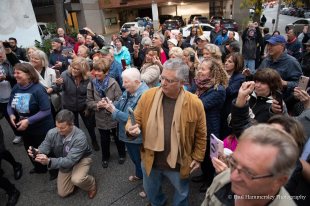 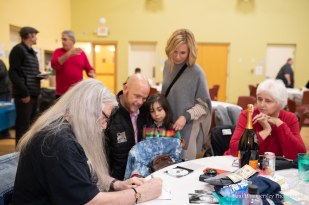 1 Comment on Norman Greenbaum feels the Spirit in Malden 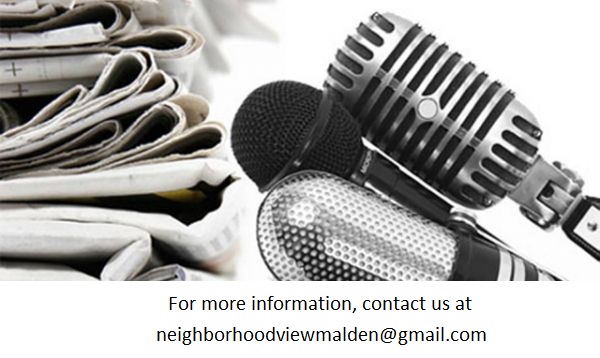