In J.D. Salinger’s classic young adult novel “A Catcher in the Rye,” the protagonist Holden Caufield notes “What really knocks me out is a book that, when you’re all done reading it, you wish the author that wrote it was a terrific friend of yours and you could call him up on the phone whenever you felt like it. Then he laments wryly, “That doesn’t happen much, though.”

Well it did at the Ferryway School!

Fifth grade students read “Escape from Mr. Lemoncello’s Library” by Chris Grabenstein, one of this year’s Malden Reads companion books. The book was a hit with the readers. On June 17, a select group came for an afterschool Skype chat with the author from his home in New York City. They got to “meet” Mr. Grabenstein via a projected image on a smartboard and ask him questions.

Students prepared their questions ahead of time and the students each took turns asking them. They asked about the author’s writing process, where he got his ideas, how he came up with the names for the characters, and how it felt to know that this book became a bestseller. They learned about his childhood experiences, what made him become a writer, and that he himself was a “reluctant reader” who didn’t like “broccoli books” that were supposed to be good for you, but loved books that had a great “hook.” 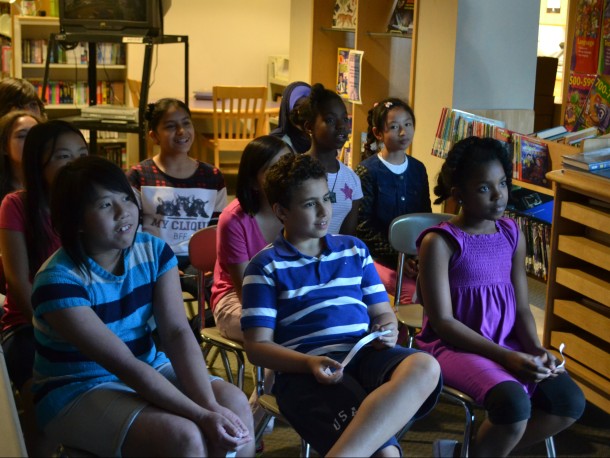 Mr. Grabenstein was as quirky, animated, and child-friendly as Mr. Lemoncello, the central character in his book. Not to mention just a little bit goofy and lots of fun.

The children described the experience as “awesome,” “exciting,” and “fun.” Their smiling faces and engaged expressions said it all.

Malden Reads is a collaborative project overseen by the Malden Public Library and MATV and run by a dedicated team of community volunteers. MATV provided technical support for the Skype chat.

The school librarians have been instrumental in carrying out the Malden Reads program in the schools for the past five years of the program.

For more photos of the event, click here. You can also learn more about the One City, One Book program by visiting the website.