There were discussions of equality and income disparities. And there was also fun, celebration and dancing, specifically displaying the beauty of the Arabic culture. This was the 7th Annual International Women’s Day 2019 event hosted by the American Association for Arab Women (AAAW) on March 16 at the Malden Senior Community Center. The event was attended by about 60 people, a diverse crowd representing many different cultures. A number of Malden’s political leaders were in attendance.

AAAW President Souad Akib welcomed attendees first by calling for a moment of silence and then reading from the Koran to honor those lost in the recent tragedy in New Zealand. She then launched into a call to action in honor of International Women’s Day, reciting a list of what should be done and how you can do it.

“We need to make sure women are treated with respect in the workplace,” Akib said. She went on to describe how it could be accomplished: “If you are a hiring manager, interview as many women as you do men” and “If you have a daughter make sure she knows she can be whatever she wants, not just a princess but a scientist, too!”

“Balance for better” was the theme of this year’s event. “We need each other, that’s what “balance for better” means,” said Akib. If women can be supported and achieve success, not only will they benefit but so will their families and society as a whole.

That point was emphasized by the film “Equal Means Equal,” directed by Kamala Lopez, segments of which were screened at the event. The film presents the case that women need to be seen as equal under the federal law with a constitutional amendment—nothing less. Any other law, outside of the U.S. Constitution, is vulnerable to every new presidential administration. A constitutional amendment would be a formidable, unwavering change that could give equality to women, the film argues.

Due to time constraints, only select portions of “Equal Means Equal” were shown, including segments on the wage gap, international women’s rights, and rape/sexual assault; discussions were held between segments.

The longest discussion focused on the wage gap and sexual harassment. The discussions took on an international perspective as many woman representing several countries spoke up.

A teacher from Morocco pointed to her country’s testing system that allowed the salary to be based on ability to perform well as a teacher; this system was also publicized for everyone to make sure they were getting the pay they were supposed to. 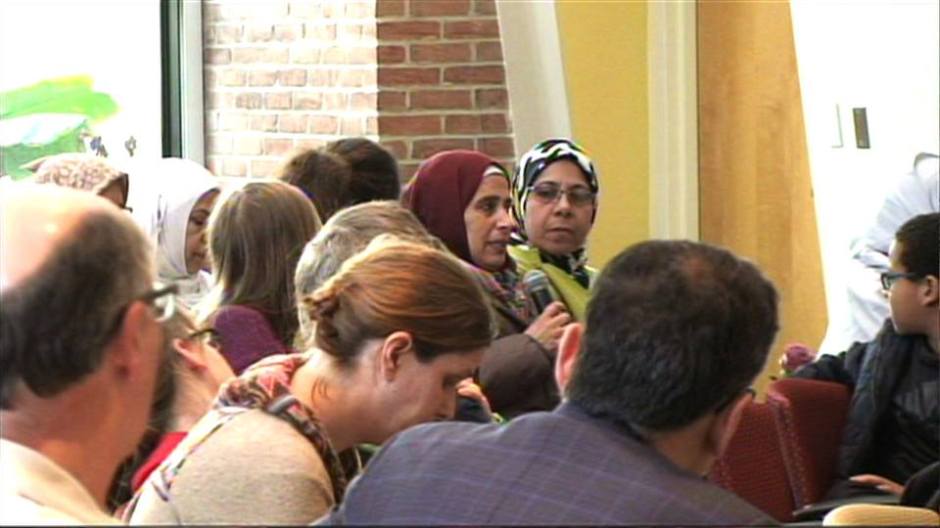 Next a woman from China pointed to the political system of communism in China that made sure everyone was seen as equal workers in the system, whether women or men. “There is a saying in China,” she said. “A woman holds up half of the sky.”

A woman whose mother came from Sweden, talked about how her mother was shocked by the pay difference in the United States and the perception in this country that women were seen as a wife first and therefore less equal in the eyes of the law. For example, until 1974, American women still needed a male cosigner for a credit application.

Discrimination was also a key topic in the talk given by Malden resident Marilyn Andrews, a guest speaker at the event. Andrews is an entrepreneur who also worked in the field of special education. She describes how she was called “dear” by her manager until she pointed out “she didn’t see any antlers.” It was a small victory for her because she can still remember today how every time he said it it made her feel “less than” equal.  Her take home messages were “Learn to speak up early” and “Learn to say no.”

The film also examined a piece of legislation on international women’s rights ratified by 189 states in the United Nations, all except six countries including the United States. This is the “Convention to Eliminate All Forms of Discrimination.”  Ugoji Eze, international human rights lawyer for the U.N. High Commission for Refugees, is interviewed in the film, and specifically asked about America’s reluctance to ratify this legislation. She said she could not explain why this country is not signed on but she emphatically points out that “many country’s leaders told me if America would agree to this they would too.” The other five states that have not ratified the legislation are Iran, Palau, Somalia, Sudan, and Tonga.

Buoyed by the energy of those performances, the call to action from Ms. Akib seemed less daunting if not impossible to tackle.

Cruising and Cleaning the Malden River

, By Karen Buck Photos by Anne D’Urso Rose and Kelsey Menon On the eve of the 2018 Autumnal Equinox during the mystical moment of twilight, two launch boats from the Gentle Giants Rowing Club (GGRC), towed 10 canoes from the Blessing of the Bay up the Malden River. Aboard were Pastor Edwin Menon of Highrock Malden Church and his wife, Kelsey Menon. They were preparing for what would be one of the largest community cleanups in Malden River’s recent history on the next day. The mostly obedient canoes snaked behind the motor boats as Rich Whelan of GGRC  told stories of his youth teams traversing  the Mystic River and the Malden River. The return trip to the Blessing of the Bay Boathouse was under a waxing gibbous moon and guided by city lights. At the end of the ride, Menon said, “Now, I really know why you love this river.” By 8:15 a.m., Sept. 22, more than 71 people mingled in the parking lot of 188 Commercial St. in Malden. The group was organized by the Menons. […]

It’s not about ping pong: Restorative practices come to Malden

Sometimes the best way to tackle a problem is to come at it in a whole new way.  The city is taking a unique approach to conflict at the Malden Senior Community Center by employing “restorative practices,” an outgrowth of restorative justice, using talking circles and trained facilitators to get at the root of an issue and repair relationships. Tensions at the Senior Center came to a head at a meeting on November 10 around the issue of the movement of a ping pong table from the more public and open space in the auditorium to a smaller room on the second level. Ping pong is a passionate pastime in the Chinese community and the Chinese players were upset about the move. But the heated debate and expression of emotion on both sides of the issue revealed tensions and conflicts that went deeper than the topic at hand. Karen Colon Hayes, community outreach coordinator at the mayor’s office had the idea to call upon Candace Julyan, a restorative justice practitioner who has been running a […]

Part two: A defining moment for a generation

Generations are often defined by key moments in history. How will the global pandemic we are now experiencing shape this young generation? Will teens and twenty-somethings see this as the moment when everything changed? What will they – and the rest of us – remember in the decades to come? With the help of an energetic group of interns, Neighborhood View embarked on a project to interview young Malden residents about their life during the pandemic. These citizen journalists interviewed their generational peers and collected stories that crystalize this moment in time, from the mundane to the momentous. Here is part two of an ongoing series. Read part one here. David Kennedy: The more you read, the more fearful you get By Masio  Dotson Twenty-seven year old David Kennedy, who grew up in Malden and has been a resident for over a decade, is an Audi car salesman, a father and now a teacher. Kennedy has transitioned to homeschooling his 5-year-old son, due to the closing of Salemwood School, using a homeschooling app called “IXL.” […]