Sometimes the best way to tackle a problem is to come at it in a whole new way.  The city is taking a unique approach to conflict at the Malden Senior Community Center by employing “restorative practices,” an outgrowth of restorative justice, using talking circles and trained facilitators to get at the root of an issue and repair relationships.

Tensions at the Senior Center came to a head at a meeting on November 10 around the issue of the movement of a ping pong table from the more public and open space in the auditorium to a smaller room on the second level. Ping pong is a passionate pastime in the Chinese community and the Chinese players were upset about the move.

But the heated debate and expression of emotion on both sides of the issue revealed tensions and conflicts that went deeper than the topic at hand.

Karen Colon Hayes, community outreach coordinator at the mayor’s office had the idea to call upon Candace Julyan, a restorative justice practitioner who has been running a program at the high school for the past two years. Hayes wanted Julyan to look at the situation and see if restorative practices may be helpful. Hayes is one of the three chairs of Malden’s Promise, a city, school and community-led coalition that addresses needs and opportunities for local youth, for which Julyan had led a presentation on the theory of restorative justice and the different ways it can be applied.

Hayes explains, “I was intrigued by the idea of focusing not on the ‘problem’ as much as repairing any harm done cooperatively. It seemed like a more effective way to address conflict.”

Maria Luise, special assistant to Mayor Gary Christenson, explains the eventual decision to hire Julyan. “Conflicts are inevitable and we are always looking for ways to bring people together, encourage open dialogue and strengthen relationships,” Luise says. “Having seen the benefits of restorative practices in our high school, we felt this would be a good tool to address the escalating tension that was resulting around policy changes at the Senior Center.” 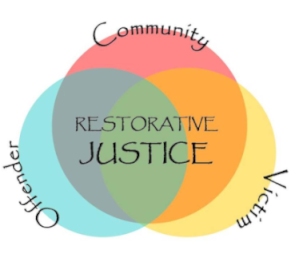 “Restorative justice is a way of approaching criminal behavior that shifts the paradigm from one of punishment to one where the perpetrator takes responsibility and repairs the harm that was caused to the victim,” Julyan explains. The veteran facilitator has worked with the Communities for Restorative Justice (C4RJ) for over five years as a case coordinator for police-community partnerships in a number of cities and towns west of Boston and, before that for seven years, as a fellow at the Center for Restorative Justice at Suffolk University.

Restorative practices are a broader term that use the same techniques but is applied as a preventative measure and a way of building healthy relationships in a school or other community-based setting.

Two years ago, C4RJ and Malden High School were awarded a grant to pilot the use of restorative practices in the high school, spurred on by mounting evidence that “zero-tolerance” policies and other disciplinary measures are ineffective at curbing hurtful and disrespectful behavior.

So, what is at the core of restorative practices?

“At the center of all restorative practices is the circle,” states Julyan. According to restorative justice theory, circles are grounded in indigenous practices where the round shape is both functional and symbolic. “In a circle, everyone can clearly see everyone else and each person is equally important to the whole,” she says.

“Circles are led by a ‘keeper’ that asks questions and then gives each person a chance to talk. A ‘talking stick’ or any type of symbolic object is passed around and only the person holding that object can speak at that time. The talking piece and the circle process slow down the conversation so that everyone can be heard fully. It is a very valuable way to have a conversation,” Julyan continues.

Along with a coworker J.J. Durham, Julyan spent some time first trying to understand the issues at the Senior Center and then developed a proposal, accepted by the mayor’s office, for leading a series of circles. Durham is an experienced mediator and restorative justice practitioner, who has since been working with Julyan to lead each circle.

“When approaching a situation like this,” says Julyan, “it’s very important for facilitators to work in teams. It allows for processing and perspective, following each circle, as we move through the process.”

When asked how the various participants initially responded to the use of circles, Julyan responded, “Pretty typically, people start out skeptical and not very trusting of the process, but this dissipates once they actually take part in a circle and come to understand what it’s all about.”

Silvia Banos, executive director at the Senior Center, admits that she did not have familiarity with the technique and was initially skeptical of the process but that her “understanding of the process evolved with the support and guidance of Candace and J.J.”

Banos elaborates, “From what I came to learn, the circles hope to provide a safe and non-judgmental space for those involved, to speak about how specific issues affect them. The circles establish the expectations that everyone will have opportunity to speak and that we must respect and honor that process even if we don’t agree with what is being discussed. It also serves to de-escalate “hot topic issues” so that a sensible and group-wide acceptable solution is explored and agreed upon.”

Mei Hung, executive director of the Chinese Culture Connection, has played a role in representing many of the Chinese community members who use the Senior Center, a population that has grown to reflect the largest minority group in the wider Malden citizenry. She understands their grievances and also understands how language and cultural differences can pose a variety of challenges to a community. Hung has taken part in several of the circles that were led in December. She relates, “I am very grateful that the mayor’s office is doing this. I think it is a good thing to allow everyone to air their grievances and concerns honestly and openly in a safe, supportive setting.”

Language posed a special challenge to applying restorative practices in this situation. Since a large population of the folks using the Senior Center are Chinese, interpreters were needed at many of the circles.

“This was the first time I needed to deal with language translation in a circle on a large scale,” states Julyan. “Sometimes the need was for Mandarin and sometimes Cantonese. Language translation adds a whole new layer to the communication process and it can be challenging, but I also think it was very valuable for everyone involved.”

Julyan often describes an analogy of restorative practices at the beginning of a new circle. “I am a knitter,” she says, “And those of you who are knitters know that once you get the yarn really tangled up, you need to untangle it by working through it one thread at a time.” Likewise, she says, “The conflicts and tensions at the Senior Center have many different sources and you can really get at the problem by having everyone focus on it one thread at a time.”

One thing that Julyan says became very clear to her as she led these circles is how much the Senior Center is loved and valued by the community. “It is a very beloved place that is playing an important role for a wide variety of purposes,” she states.

Councilor-at-Large Debbie DeMaria has been taking part in the restorative circles, representing the City Council which is the official body that hires and oversees the office of the Senior Center director.

“I adore the Senior Center,” says DeMaria. “Remember, in the old days, when it was in the musty basement of City Hall? Now we have this beautiful center that is so vibrant and active!” DeMaria runs a “bridging” program at the center that pairs seniors with students for intergenerational activities. “I’ve spent more time at the location than any other councilor, so I’ve been privy to certain things that were going on. I could feel the undercurrent of tension that was developing.”

“I think the circles are really, really great. Everyone has a chance to share how they feel.  There’s no right or wrong,” DeMaria emotes. ”There’s no interrupting. It makes everyone think. Our community is changing and it can’t always be ‘Maldonians have always been doing it this way.’ We all need to learn how to work together as a community. It can be hard, but I think we are on the right path.”

DeMaria adds: “When things got heated back in November, it was clear that this was not just about ping pong.”

Maria Luise states, “It has been an interesting process to observe and we hope to continue to utilize these tools to foster better communication as well as collaborative problem solving.”

Senior Center Director Banos sums it up. “I guess my biggest hope is that the outcome of this process will assist us to utilize the lessons learned and expand our vision to the further development of a progressively exciting Senior Center that offers an inclusive and enlightened environment for ALL of the senior citizens of Malden, MA.”

By Diti Kohli As the reconstruction of Malden City Hall enters its its final year, details on time of completion, parking, and security are now emerging. The exact finishing date of the new Malden city hall cannot be confirmed until the city acquires the building’s shell, according to a city official. The goal is to open the building by late 2019 or early 2020. Ron Hogan, director of the parking department and member of the municipal building committee, said the city “anticipates taking possession of the building sometime in the early April time frame.” Until then, individual offices cannot be built. Initially, the city reported they would acquire possession in March with the goal to finish construction by November 2019.  The demolition of the previous city hall, which was built in the 1970s, will reconnect the two ends of Pleasant Street and provide access to the MBTA Station at Malden Center. The new buildings, developed by Jefferson Apartment Group, will be an eclectic mix of commercial, residential, and civic sections. Retail stores will occupy 22,000 […]

Have a sweet tooth? Head over to Hoff’s Bakery located at 35 Green Street in Malden. The 110,000 square feet facility features a retail component where residents can purchase desserts during regular business hours. Hoff’s, formerly located in Medford invested nearly $8.3 million in renovating the site of the former Asahi America building in order to triple their size. Hoff’s, a family owned and operated company, takes pride in being a forward thinking company that offers exceptional quality products with a personal touch. Nicole and David Frattura, the brother-and-sister team behind the Malden move, talk to MATV’s Neighborhood View about their gourmet cakes, European style tortes, individual desserts, brownies, mini pastries and more.

Lights, camera … Malden? On Thursday, May 19 between 1 and 8 p.m., Dorchester native Mark Wahlberg shot scenes for his upcoming flick “Patriot’s Day” at Hugh O’Neill’s, Malden’s neighborhood Irish pub located at 45 Pleasant St. Wahlberg, who filmed “Ted 2” at the Malden Public Library in July 2014, is filming the made-in-Massachusetts chronicling the Boston Marathon bombings. Wahlberg stars in the movie as Boston Police Sgt. Tommy Saunders, a composite character based on several people involved with the police response to the bombings. The all-star cast includes John Goodman, Kevin Bacon and J.K. Simmons. “Patriots Day” is being produced by CBS Films. It is slotted for a Dec. 21 release in Boston, New York, and Los Angeles, before a wider release on Jan. 13, 2017. –Photos by Paul Hammersley