On Saturday, December 13, 2014, Mai Du, of Wah Lum Academy in Malden, brought a call to action from the community. Du hosted a forum entitled “An Honest Conversation of Ferguson and Beyond.” She wanted teens and children to speak their thoughts on the happenings of late, and to get more involved.

The group of about 75 people consisted of teens, younger children and adults. The program was facilitated by a group of teens.

In the beginning, large blank papers were placed around the room for participants to place stick-ums on, according to categories including fears, hopes and questions, etc.

The leaders reviewed what had happened in Ferguson, with the known facts. Then participants were given a pre-determined subject to discuss in small groups of six.  People were grouped with diverse ages, races and ethnicities. The groups were given about 20 minutes to discuss among themselves. Then, all joined again in the large group to share what came out of the small groups. These groups met three-to-four times with different questions, and would again join the larger group to discuss.

Mai Du (left with teen leaders presenting the program)
One child responded that “the policeman should have asked questions before shooting.”

Another young woman spoke of being part of a bi-racial family. She has witnessed the differences in how her white family members function in society so freely, yet her black family members have been followed in stores, stopped by police for no apparent reason. She shared the pain in observing the differences noted when she visits relatives in other states from when she was in Massachusetts.

One man felt there was no racism in the killing of Michael Brown. He stated that the autopsy showed that M. Brown had gun powder on his hands, and thus he was in close proximity to the police officer. The police officer was probably fearful for his life. 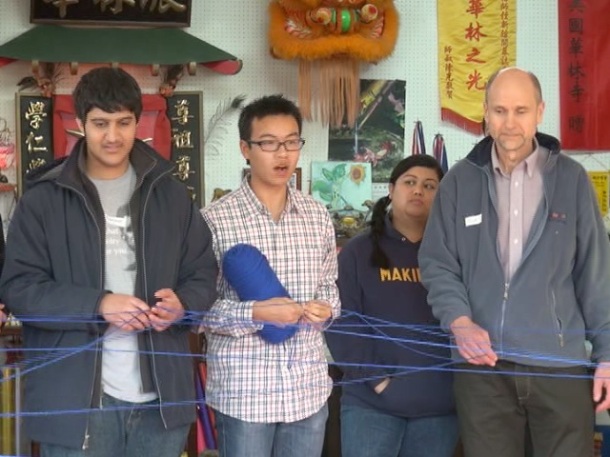 The meeting ended with everyone getting in a circle with a ball of yarn thrown around. If someone raised their hand to speak, the yarn was thrown to them. Many people, young and old, used this time to speak on how much this meeting meant to them. One woman hoped that this type of meeting would be continued and not be a one-time-only event. A college student voiced how real the diversity was in the room. She mentioned that she had done a college entrance paper on diversity, but this forum made it all real. The yarn ended on the floor looking like a spider web across the room which signified how we are all connected.

The teens are in the process of planning next steps that will grow out of this discussion.

Reported by Diana Jeong More than 150 residents packed the Malden Senior Center on Sept. 28 to hear candidates for the Malden School Committee discuss their positions on issues ranging from bilingual education and family engagement to teaching subjects in a culturally sensitive manner. The candidates forum was sponsored by the Greater Malden Asian American Community Coalition (GMAACC) the Mass Senior Action Council, Chinese Cultural Connection, Chinese Progressive Association, and APIsCAN (which a coalition of groups who serve various Asian communities throughout Massachusetts). These organizations have worked together in the past on civic engagement and language access issues. The Malden School Committee consists of the mayor and eight members who are elected from each of the city’s eight wards. Three of those seats are being contested in the municipal elections to be held Nov. 7. All school committee candidates were invited to attend the forum;  eight participated. Lisa Wong, former mayor of the Fitchburg and current Deputy Director of the Asian American Civic Association, served as moderator. The forum began with greetings from Malden Mayor […]

City and court officials gathered on the sunlit steps of the Malden District Court on March 19, proudly adorned with petite white ribbons, to denounce domestic and sexual violence. Through a clamored array of “I do’s” and nods, each official pledged to use their position to prevent these crimes and bring justice to victims.   “We promise to be part of the solution in ending violence against women and all gender-based violence,” said Mayor Gary Christenson in a statement he read to the crowd. The “Stand With Us” event coincided with the annual state-wide White Ribbon campaign, pioneered by Jane Doe Inc., Massachusetts’ coalition against sexual violence and domestic abuse. It aims to involve men in the unending fight against violence. Malden’s Department of Community Outreach and individuals within the district court worked collaboratively to organize Tuesday’s event. Mayor Christenson and the City of Malden advertised the gathering on Twitter in an effort to rally residents to participate in the pledge alongside authorities. However, no outside individuals attended. In a conversation on the court steps […]

The Show is Over for Showcase in Revere

By Nicholas Forgione If 2020 were a disaster movie, an obvious cliche would be the end of a long-standing movie-house in America’s Beach City. In fall of 2020, Revere’s Showcase Cinema de Lux —  closed due to pandemic restrictions — announced that its doors would  not reopen and that the property would change hands. While the area has other  movie-houses, (including some owned by Showcase), the end of Revere’s Showcase is the end of an era.  From its location near Revere’s Northgate Shopping Center, on the border of Malden’s Ward 8 along Route 1, Showcase Cinema was the backdrop for, and part of, the stories of area residents for more than five decades.   The  end of the Revere’s Showcase Cinema reflects the conflict between  sentiment and practicality.  Earlier this year, National Amusements Inc., the owner of Showcase Cinemas, reached an agreement with real estate firm NorthBridge Partners for the sale of the theater;  the property will be leased to  Amazon.  Jonathan, a former resident of Malden who worked at Showcase in the 1990s, recalls “lots of fun memories.”  Jonathan concedes to being “saddened” at an emotional level. And, he […]