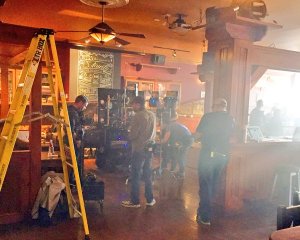 Wahlberg, who filmed “Ted 2” at the Malden Public Library in July 2014, is filming the made-in-Massachusetts chronicling the Boston Marathon bombings.

Wahlberg stars in the movie as Boston Police Sgt. Tommy Saunders, a composite character based on several people involved with the police response to the bombings.

The all-star cast includes John Goodman, Kevin Bacon and J.K. Simmons.
“Patriots Day” is being produced by CBS Films. It is slotted for a Dec. 21 release in Boston, New York, and Los Angeles, before a wider release on Jan. 13, 2017. –Photos by Paul Hammersley

Driven by a desire to give back and to offer educational opportunities to young urban learners,  Dr. Charles Grandson IV, Interim Superintendent of the Malden Public Schools, reflects on his journey with education. He says his success is a “testament to what is happening every day in the public school systems across the nation.” In his case, though he had trouble and at one point could not read, his teachers did not dismiss him but did what they had to do to help him become what he is today. Though Grandson never imagined he would be a superintendent or principal, he says he has always had a bit of a teacher within. This inclination was nurtured by important learning encounters that would shape his future. His mother, a single parent, arranged for Grandson to be schooled away from the crime close to home. In a school district closer to Georgetown, Grandson experienced a “different” kind of education than he would have had in his own neighborhood on the South East side of Washington D.C. Throughout […]

ELECTION 2019: Questions for the Candidates: Week 4 of 5 – Housing Needs

By Prisco Tammaro The 2019 elections in Malden are approaching. The Municipal Election will be held on Tuesday, Nov. 5, 2019. To provide Malden voters with information, Neighborhood View is running a series of “Quality of Life” questions and answers with the city council and mayoral candidates. Suggestions for questions were provided via Facebook on a Malden (MA) Politic’s poll; 10 questions were formulated by the moderators in consultation with Neighborhood View and sent to all  candidates. Each candidate was given 150 words to respond to each question. Every effort was made to reach out to every candidate. Below are answers to Question 7 and 8 which focus on housing needs in Malden. Please note: all opinions here are those of the candidates and Neighborhood View has not checked the accuracy of these comments. See links for previous questions at the bottom of this page.  QUESTION 7: What percentage of units in new developments would be allocated to affordable housing?  MAYOR – Incumbent – GARY CHRISTENSON Several communities have adopted inclusionary zoning to leverage the […]

By Nikita Sampath  Two days after the Olympic Games began in Beijing, Chris Choi, a Malden nursing student originally from Hong Kong, was standing in the bitter cold in Copley Square  with a group of protesters calling for a boycott of the games to draw attention to reports of human rights violations in China.  “Any kind of participation in the games is equivalent to being complicit in the atrocities China is committing,” said Choi who has been organizing for No Beijing 2022  in the last few years. Choi’s family left Hong Kong following the Anti-Extradition Law protests in 2019-2020.   A few miles away in Medford, a group of protesters, including some from Malden, have been gathering every Saturday from 10 a.m. to 12 p.m., in front of the Colonial Volkswagen dealership on Mystic Avenue. The protests started in reaction to the allegations that Volkswagen has been using forced laborers of Uyghur descent, an ethnic minority in China, in the company’s factory located in Urumqi, Xinjian, built in 2013.  Organized by Maya Mitalipova, the president of the Boston Uyghur Association, the weekly demonstration […]