On the first Monday of each month, Ron Cox and crew can be found hard at work preparing to shoot yet another live episode of his show, “Live on Tape,” which airs on Malden Access television.

They bustle around between MATV’s Studio A, the control room and Cox’s office. Guests and topics are often quickly scratched off the running order and replaced, according to Director Suzanne Ress who has worked on the show for the past three years.

“Part of the intro is ‘Ready or not, here we come,’ sort of verbiage because ready or not, we go live at seven and whatever’s happening is live,” says Ress. 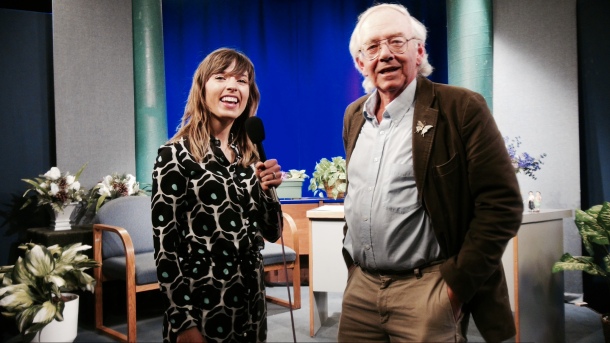 Loosely based on Steve Allen, Johnny Carson and David Letterman, “Live on Tape” is one of the longest-running productions still being shot and aired at MATV.

“I was one of the first producers doing a show at MATV when we first opened,” recalls Cox. “It was 1989. We came together to come up with the idea for the show, but it took us about six months to get it together, so 1990 was our first year we did show number one.”

Normally, the show opens with a short comedic monologue and then moves into a series of guests ranging from local non-profit representatives, to politicians, and even entertainers. Cox says the goal is to focus on interesting people of various backgrounds, but also openly admits enjoying the opportunity to make jokes about his guests right to their faces.

Although he’s now Executive Director at MATV, Cox was not always in television, “My background is social work, dealing with kids. When I saw how this could become a vocation, I changed my career. I went from social work to working in film and video and now I run a media center.”

When MATV entered the Malden community, he realized he could make a living working in media, originally something he did on the side for fun.

Neighborhood View caught up with Ron Cox and his director, Suzanne Ress, as they prepared to shoot their 175 live episode of “Live on Tape.”

Was the intent to keep incumbent Councilor-At-Large Debbie DeMaria off the November 3 ballot when the executive director for the Massachusetts Republican Party Brian Wynne and Malden Attorney Michael Williams filed a last-minute complaint with Malden’s city clerk, the Board of Registrar of Voters and the city solicitor?

Favorite holiday greeting from the community?

Wanna get into the holiday spirit? Individuals, organizations, community groups and local businesses participated in MATV’s annual “Holiday Greetings from the Community.” The greetings will play on MATV throughout the holiday season. Have a favorite holiday message? Tune into MATV and respond in the comments section below with your pick. Meanwhile, check out Neighborhood View’s favorite greeting of the season below:

Nathan Lamb stepped into the role of editor at the Malden Observer in the summer of 2011 just a few months before Gary Christenson was elected mayor. Three years is actually a long tenure for that post. Neighborhood View caught up with him as he prepares to leave the position. What will you miss most about the job? These things are always kind of bittersweet. I’m excited to start at a new job but I’ll miss the stories that take place every day here. I’ll miss meeting such a variety of great people in Malden and being out and about in the community. I’ve really enjoyed getting to know some great organizations in Malden like the Bread of Life, the Immigrant Learning Center, Triangle, and MATV. I’ve also been fortunate to work with a great team of regular contributors who’ve helped me fill the paper, week-in and week-out, so I guess now is a good time to thank them! Where will you be going? I’ve taken a job with a content management firm up in […]